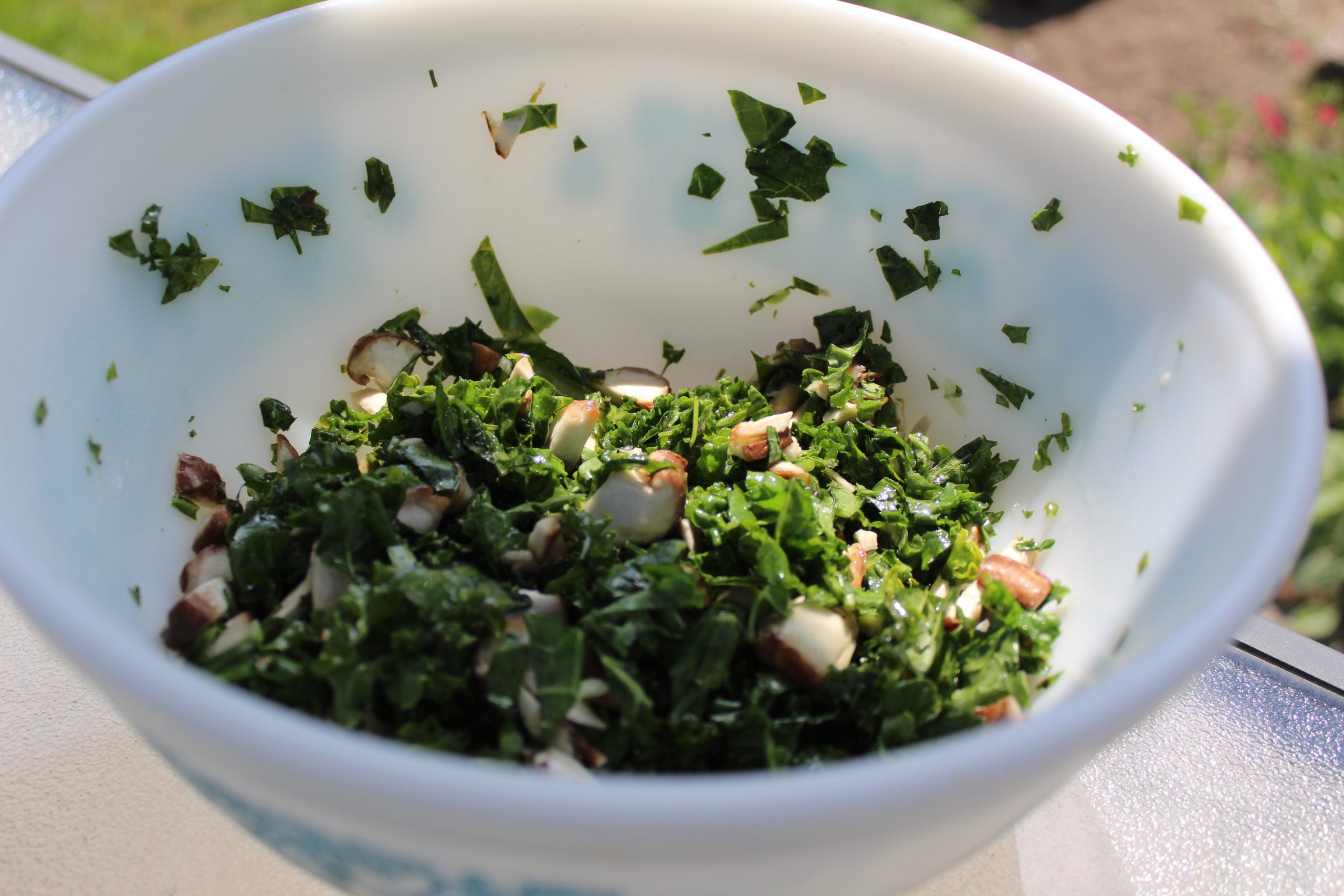 A library discard is the key to my success with summer salads. The Lemonade Cookbook wasn’t circulating, so it got purged from the shelves of my local library, and I took it home. Every recipe I try in this book is fantastic. Most are healthy. Here are this week’s favourites…

Kale. Kinda tough to work with and to chew. Even in a smoothie, kale can be bitter. The secret, it turns out, to edible raw kale (so good for your body) is to remove the stems, slice it thin and then let it soak a while in a homemade vinaigrette so that the leaves soften, becoming more palatable and absorbing the flavour of your dressing. I adapted this recipe to make a bowl about the size you see in the main photo above.

Tummy trouble in the family means one person is eating boiled potatoes and quinoa for every meal. It just makes sense to use the potatoes and the quinoa as a starting point for what other family members eat. I’ve made lots of different potato salads in the past, but I especially like this throw-it-together one because it’s light.

I’d never heard of quinoa until a few years ago. From Peru, full of protein and easy to cook, this grain contains more nutrients than most – look it up! I don’t like the taste or smell of boiled quinoa, but the grain, once cooked, absorbs flavour well and pairs with almost anything. Try to catch your quinoa after it pops and softens but before it goes mushy – kind of like rice or al dente pasta.

Use any vinaigrette you have on hand and toss cooked (cold) quinoa with chopped veggies of your choice. I have basil growing in the garden, so chopping local tomatoes, tossing them in a light vinaigrette (like the one I used above in the potato salad) and adding the basil and quinoa makes a gourmet salad in minutes. Super yummy and incredibly healthy.

Eat more veggies and whole grains! Take advantage if, like me, you live in a cold country where NOW is the moment to get your hands on fresh, locally grown produce!

What are soba noodles, you ask? They are noodles made from buckwheat. Buckwheat pancakes? Yuk. Buckwheat noodles? Yum. Find them at your local Asian grocery store. If you don’t do a lot of Asian cooking, you might be missing a few essential ingredients (sesame seed oil, rice vinegar, soy sauce…)

Make the dressing (think pasta sauce) in the blender, like you would a homemade mayo:

Throw the first six ingredients into your blender, pulse a few seconds, then slowly drizzle in the canola oil until it thickens. I added about half the oil called for in the recipe.

Boil your noodles like you would any pasta – they’ll go faster than you expect. Don’t let them get mushy. Strain the noodles and rinse in cold water to prevent congealing. Toss the noodles in your dressing. Plate them. Add washed kimchi (I’m not doing this again – it was okay, but next time I’m adding fried shitake mushrooms – leftover from my kale salad, mentioned above). Sprinkle on green onion and sesame seeds. YUM!

NOTE: I tossed my noodles lightly in the dressing and then realized you want them to be coated like a pasta with white sauce – they needed lots more… not as pretty, but much tastier. 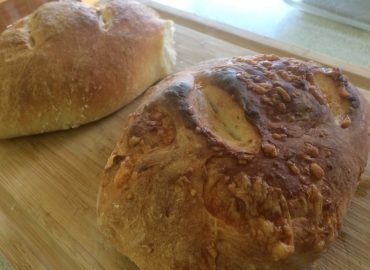 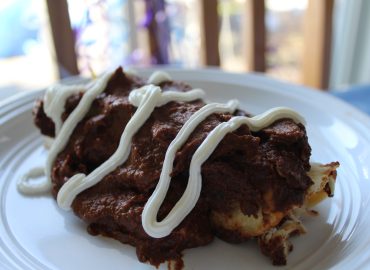 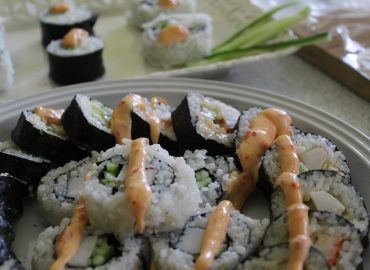